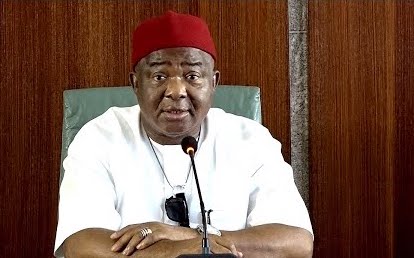 Following the attacks on the headquarters of the Nigerian Correctional Service and the Nigeria Police in Imo State, Governor Hope Uzodinma said about 50 suspects have been arrested.

Gunmen had invaded the two public facilities on April 5, razing down the institutions and freeing over 1,800 inmates.

During the attack, one person suspected to be a fleeing inmate was hit by a bullet while carrying his travel bag.

But speaking during a visit to President Muhammadu Buhari at the presidential villa on Friday, the Imo State Governor said the arrested suspects are helping security agencies with useful statements.

“As at the last count, we arrested almost 40 to 50 people, who also made useful statements and confessed to the crime,” he said.

“I continue to tell you that this issue of banditry is something that we must all rise up as people to condemn and then support security agencies to be able to provide an enabling environment for people to go about their businesses, without fear of any molestation.”

He also blamed the criminal activities happening across the country on opposition elements, insisting that they were funding criminals to discredit President Buhari’s administration.

While condemning the recent attacks by armed bandits on communities, especially in the northern part of the country, Governor Uzodinma challenged the security agencies to urgently reveal the names of their sponsors.

The Imo governor also condemned the call for secession, stressing that criminals particularly in Imo were a combination of individuals within and outside the state.

He added, “What people are doing is to sponsor crisis to the extent that those funding banditry are politicians and I challenge and call on the security agencies to make their names available to the press because what they want to do is to distract a government that is focused.”