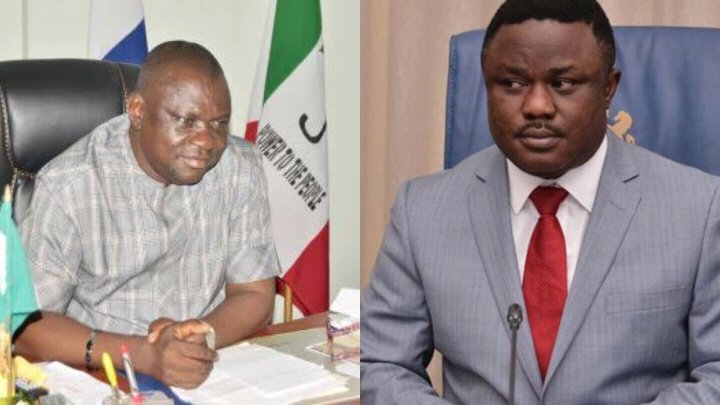 The Speaker, Cross River State House of Assembly, Eteng Jonah-Williams, has said Governor Ben Ayade was not respected and honoured by the hierarchy of the Peoples Democratic Party before his defection to the All Progressives Congress.

Jonah-Williams, who spoke in an interview with the News Agency of Nigeria on Tuesday in Calabar, said Ayade’s defection from the PDP to the APC was timely.

The Speaker, who represent Yakurr II State Constiturncy in the Assembly, told NAN that out of the 25 House of Assembly members in the state, APC has 18, while the PDP has seven.

He said: “Before the governor took the decision, he consulted widely and majority of the people told him that he needed to move to the APC.

“While in PDP, the governor was not respected and given the honour he deserved by the hierarchy of the PDP as the leader of the party in the state.

“So, there was need for him to move.

“The Governor has also stated clearly that he needed to align the state with the happenings in the centre for the interest of the state.

“Cross River is known for always playing politics with the centre.

“Since 1999, former Governors Donald Duke and Liyel Imoke all played politics from the centre.

“Ayade is the only governor from the state who has played opposition for six years now and he feels it is time to align with the centre for the benefit of the state.”

Jonah-Williams recalled that during the last ward and chapter congresses of PDP in the state, the PDP at the national level had to recognise a list of executive members who did not even contest for the positions at the ward and chapter level.

He said such marginalisation of key stakeholders in the state by the PDP also informed their decision to defect with the governor to the APC.

“As Speaker of Cross River House of Assembly, the ward list from my political ward that I have been winning elections with was neglected and a new list was constituted with members that I do not even know and nobody consulted me,” he said.

According to the Speaker, the remaining two years period of Ayade will attract the needed development from the centre into the state.

Jonah-Williams gave assurance that APC will win all the elective positions in the state in the 2023 general elections in view of the governor’s defection to the ruling party.

He said: “The Superhighway and the Deep Seaport will now be given utmost attention by the Federal Government and other things will also fall in place as well.

“Governor Ayade has spent six years in office, I will advice him to consolidate on the gains of his industrial revolution in the state by completing the projects and privatising them for the future.

“The House of Assembly wants the industries that were initiated by Governor Ayade to live beyond this administration.

“On road infrastructure, I want to specially commend the governor on the construction of the Mfom-Obanliku dual carriageway and the ongoing East-West Road in Boki Local Government Area.”