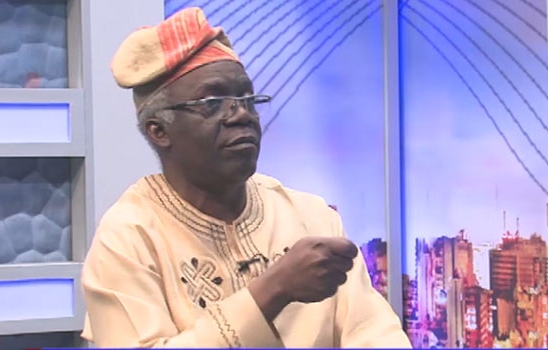 Speaking during an interview on Channels Television Programme, Politics Today, the Senior Advocate of Nigeria described the action of the security agents as a “nocturnal coup,” and stressed that no law allows arrest at the dead of the night.

He lamented that the raid, which was carried out around 1:00 a.m. on Thursday, last week is a dangerous legacy of military dictatorship in Nigeria.

“There is no law in Nigeria that allows you to arrest somebody in the dead of the night when you are not planning a coup and you are not an armed robber.

“These are very dangerous legacies of military dictatorship in our country.

“Now, Sunday Adeyemo has said I didn’t have any gun in my house. Yet, the SSS paraded guns and other ammunition. All the controversies would have been unnecessary if the SSS had behaved like a modern, civilised agency,” Falana said.

Falana also reacted to the decision of the Southern governors in Lagos State on Monday that security agencies must notify them as the chief security officer of their states before they carry out any operation within their domain.

See also  Yoruba Nation Rally: We Are Here To Ensure The Protest Is Not Hijacked by Hoodlums – Says Lagos CP

According to him, the decision of the governors is late.

“It is a decision that is coming rather late. Governors are chief security officers of their states in line with the constitution. Each state has a security council and the governor is the chairman,” he said.

“The invasion of the home of Igboho happened in the night.

“You can’t have a situation where nocturnal arrests are made in a state as if you are planning a coup. Take Ibadan for instance, the invasion of the home of Igboho happened at the night and for all-day, everybody was wondering who did it and that seven people were killed.

“People were arrested and abducted at 2:00 a.m, the governor of the state wasn’t aware. So, everybody was trying to find out, calling security agencies, only for the State Security Service to issue a very provocative statement after almost 12 hours to say, ‘We did it, we killed two people, we raided a house.

“Somebody attempted to evade arrest and you killed two people? The governor of the state wasn’t aware?”

The Department of State Services (DSS) hours after an attack on the home of Yoruba Nation agitator in Ibadan, confirmed that a team of joint security operatives raided his home and arrested 13 of his armed men.

DSS Spokesman, Dr. Peter Afunanya told journalists that the raid was based on intelligence that Igboho was stockpiling arms to cause chaos within the region.