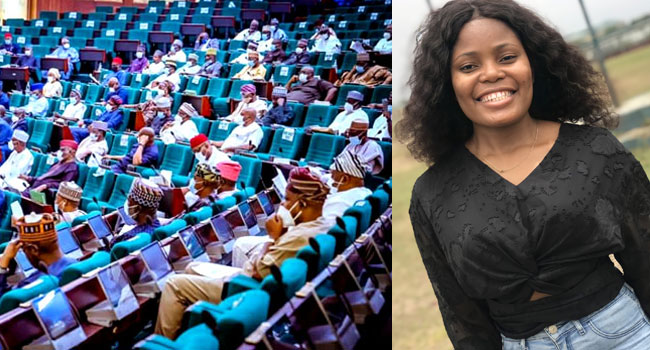 Members of the House of Representatives on Tuesday demanded that the Inspector General of Police, Alkali Baba, take over the murder case of Miss Iniobong Umoren who was killed in Akwa Ibom after she was lured with a fake job offer.

The House urged the IGP to ensure that justice is done by taking over the investigation and prosecution of the suspects.

The resolution of the House follows a matter of urgent public importance raised by Unyime Idem representing Ukanafun/Oruk Anam the federal constituency of Akwa Ibom State.

They also mandated the IGP to ensure the protection of Umoren’s family members from harassment, intimidation and harm.

Idem told the House that the family members of the deceased have reportedly raised an alarm of receiving strange phone calls and threats of various degrees and have been asked to withdraw the case.

Adopting the motion, the House mandated the House Committee on Women Affairs and Social Development to follow up with the investigation and prosecution and ensure compliance.

Find below the note presented by Representative Unyime Idem to the House:

A Call For Comprehensive Investigation, Prosecution And Punishment Of The Perpetrator(S) Of The Kidnapping, Sexual Assault, Physical Assault And Heinous Killing Of Miss Iniobong Ephraim Umoren And The Need To Protect Her Family Members

AWARE that on April 30, 2021, the Anti-kidnapping Squad of the Akwa Ibom State Command of the Nigeria Police Force received a criminal report on the disappearance of Miss Iniubong Ephraim Umoren who left her house on a fateful day in search of employment.

NOTE that Miss Iniubong Umoren was a graduate of the University of Uyo in Akwa Ibom State who was without employment since her graduation from the University.

NOTE ALSO that available information has it that she received a phone call from the assailant who pretentiously called her and invited her to a false interview of an advertised job.

AWARE that the innocent Miss Iniubong Umoren was later found dead by the Officers of the Nigeria Police Force after an official report and with the help of a wide reportage of her disappearance and information of the false interview on social media platforms. Her body was further exhumed where it was buried in a shallow grave by her assailant.

COGNIZANT that It has been reported that the assailant upon his arrest by the police and subsequent voluntary confession boasted that he is well connected and will be released from the Police custody scot-free in a matter of days.

BOTHERED that the family members of the deceased have reportedly raised an alarm of receiving strange phone calls and threats of various degrees and have been asked to withdraw the case.

REGRETS that the Nigeria Police Force has been reporting a surging high record in rape and gender violation across the country. Unfortunately, a very scary number of cases have been reported daily with thousands unreported. These acts are a gross violation of human rights to dignity, life, and sexuality.