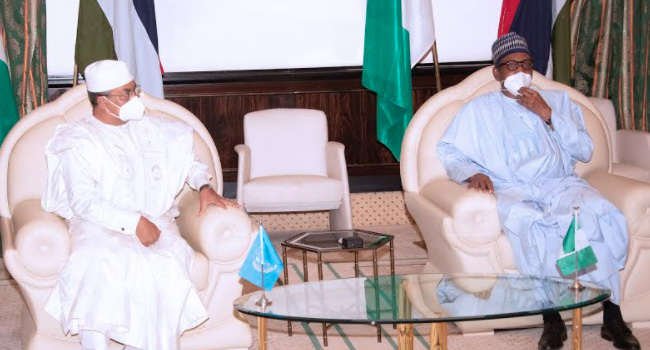 President Muhammadu Buhari has called for collaboration among countries in the West African sub-region and those in the Sahel to fight the security challenges confronting them.

The President stated this on Tuesday at State House, Abuja, while receiving the new Special Representative of the UN Secretary-General for West Africa and the Sahel (UNOWAS), Mr. Mahamat Saleh Annadif.

President Buhari in a statement by his Special Adviser, Femi Adesina, said “You are our neighbour. You have vast experience on matters affecting the Sahel, having served for five years in Mali. I hope you will get the countries to work together to confront the issues affecting them.”

Describing the problems as “enormous,” President Buhari noted that Boko Haram has exacted a heavy toll in terms of lives and resources in Nigeria and some neighbouring countries, while Mali equally has a large swathe of the country occupied by militants.

‘I hope under the auspices of UNOWAS, you will help get the problems sorted out. Most of them have to do with the instability in Libya, and it affects all of us”, Buhari noted.

The President pledged Nigeria’s assistance to the Special Representative in his assignment.

In his response, Mr Annadif said he was visiting shortly after his appointment because he recognised the crucial role of Nigeria in West Africa.

He admitted to being familiar with the problems of the Sahel region and would depend on the help of Nigeria to succeed.

President Buhari had in the past linked insecurity in the region to climate change, particularly the shrinking of Lake Chad.

“The lake was a major source of livelihood to more than 45 million inhabitants of the region,” he told the 73rd United Nations General Assembly in New York in 2018.

“It’s shrinking meant loss of livelihood and they are now rendered poor and vulnerable to the activities of extremists and terrorist groups.

“The instability it has caused in the subregion, intensified internal displacement, among other consequences to intense economic competition especially between farmers and herdsmen.”