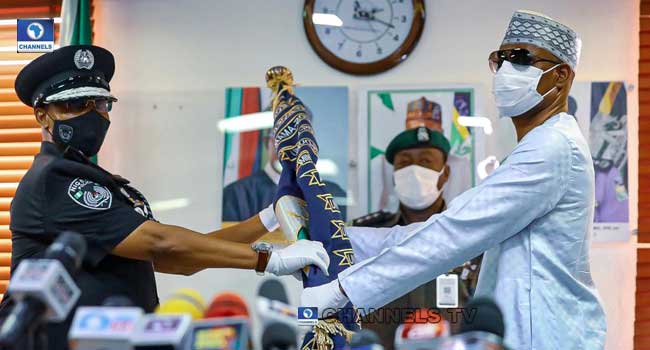 Usman Alkali was confirmed on Friday during a meeting of the council in Abuja presided over by President Buhari.

The Minister of Police Affairs Maigari Dingyadi who confirmed the development in a briefing after the meeting quoted the Nigerian leader as urging the IGP to justify the confidence reposed on him by reducing the rising wave of insecurity in the country.

Vice President Yemi Osinbajo physically attended the meeting which was billed to take place last week but postponed to honour the late Chief of Army Staff, Lt. Gen. Ibrahim Attahiru, and ten other military officers who died in a plane crash on May 21.

Others who physically attended the council meeting include the Chief of staff to the President, Ibrahim Gambari; Secretary to the Government of the Federation, Boss Mustapha; National Security Adviser, Babagana Munguno; Chairman of the Police Service Commission, Musiliu Smith; Ministers of Interior, Rauf Aregbesola; Police Affairs, Mohammed Dingyadi.

The Chairman of Nigeria Governors’ Forum and Governor of Ekiti State, Kayode Fayemi also physically graced the event but his counterpart, the Governor of Borno State, Babagana Zulum, and the Minister of FCT, Mohammed Bello joined virtually.

Dingyadi had on April 6 announced President Buhari’s confirmation of Alkali as the replacement for Mohammed Adamu.

Before his new role, the Yobe-born police chief was the Deputy Inspector General of Police, Force Criminal Investigation Department, Force Headquarters in Abuja.

See also  How Suspected IPOB Commander, Six Others Were Killed In Imo

The IGP’s appointment comes amid heightened tension in several parts of the country, particularly in the southeast region where assaults on security formations and other public facilities have become commonplace.

In the wake of the renewed attacks, the police boss had in May flagged off a new operation codenamed Operation Restore Peace in the southeast and south-south regions.

He had before then also met with commanders from the areas to profer solutions to the hike in insecurity in the regions.

“It is not like we do not have problems in other geopolitical zones of the country, but we have to address them one after the other,” the IGP said during the meeting held on April 9.