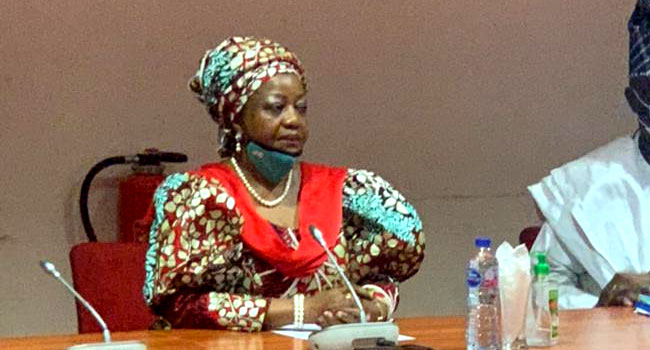 The Senate Committee on the Independent National Electoral Commission (INEC) has started the screening of the nominees of President Muhammadu Buhari as national commissioners of the electoral umpire.

One of President Buhari’s aides, Lauretta Onochie is among the nominees.

The nomination of Lauretta Onochie who currently serves as Senior Special Assistant on New Media to President Buhari has elicited public criticism from the opposition Peoples Democratic Party (PDP) and civil society organizations who are against her nomination on the grounds that she is an alleged card-carrying member of the ruling All Progressives Congress (APC) and is not proper to be appointed as an election officer.

In her introductory remarks, Onochie said she is not partisan. She admitted that she had seen the petitions against her which are not only from the opposition but also from people in the APC. She said the opposition to her candidacy is because she is known to be non-partisan and someone who insists on due process and the right thing to be done.

However, Committee members questioned her stance on non-partisanship.

Senator Istifanus Gyang queried that one of the petitions against her has an affidavit affirming her membership of the APC.

Senator Ike Ekweremadu in his contribution said he is worried that her nomination is flouting the principle of Federal character.

He explained that there is a nominee already from Delta State whose tenure will soon expire and Lauretta is being nominated for the second slot for the South-South which should go round the southern states, however, the nomination means that for a second time the position is going again to Delta State to the exclusion of the other Niger Delta states.

Ekweremadu advised her to withdraw her nomination to preserve the integrity of President Buhari.

However, Senator Lawal Gumau said there is nothing wrong with her nomination and maintained that all the petitions against her are sentiments.

In her response, Onochie explained that the INEC National Commissioner who Senator Ekweremadu made reference is May Agbamuche Mgbu.

According to Onochie, Mgbu was nominated under her husband’s state – Cross River and not Delta State. She explained that since President Buhari won his second term, she has removed herself from all things political.

She maintained that from 2019 till date she has not had anything to do with any political organisation and did not partake in APC’s validation exercise.